This is the final production stage of this editorial project. I have already studied lots of creative practitioners working in the publishing industry and the different tools, methods and structures to doing this. This week I will be bringing together everything I have learnt and produced over the last few weeks to finalise my article outcome.

I will be considering the production, launch, manufacturing and promotion of my article.  Finalising my 3000-words into a full outcome plan.

Publisher and art director at Read-Only Memory. He is based in Barcelona but has clients around Europe including London which makes his meetings more purposeful as they need to be worth the travel.

He started off by doing record design from a young age because it was something he was genuinely interested in he had no idea that it would develop into him working for himself or having his own company.

Working in the music and book publishing industry taught him how the editorial process worked. Having the insight of what goes on behind the scenes. This gave him the prior knowledge of how he would later do it himself when he set up his own publishing company. Having the background of record covers allowed him the skill to design covers that has to instantly grasp the audience straight away.

Darren runs the whole company himself so his responsibilities are everything.

Writes books about the computer game industry, however, this is so different from what he had done previously. He wanted to design beautiful books with something he is personally interested in. This combination ended up working quite well.

To make these books happen, he gathers lots of research about the topic and generates normally as much content as nearly the copy itself.

Kickstarter is such a great way to try something out and if anything proves to the people that turned you down that an idea can work. Read Only Memory is a perfect example of this as nobody thought his idea would work and he couldn’t get any funding but the first Kickstarter launch completely took off.

These books are designed based on the outcome of it being an object that you would want in your house and keep on your bookshelf to look pretty or to touch and to be very visually appealing as a whole. Focusing on this and not the standard marketing tools as most editorial companies it has made his work truly stand out. How would you fund, distribute and promote your work?

There are so many different ways of launching a product of any kind. But for publication it costs and you need to have the financial stability to do this. You can fund this yourself, go to someone with your idea and hope that they fund you, or the route that I believe I would take is Kickstarter. As Darren Wall beautifully sold it in his podcast, you can put your idea into the world and let the world decide if your idea is successful or not. If they believe it is, you have the freedom to design something however you want. You are not bound by someone telling you what they want or need it to be.

1. Design a visual synopsis of your publication, to include the following:

For the design of my article, I am going to follow the design plan I made last week:

Something clear, cut, and simplified. A front cover that does not intimidate or scare of the viewer. The subject of the article is one that is overlooked and should be read by the target audience of fellow chronic illness patients. So it needs people to feel comfortable to read.

I began mocking up my article in InDesign and followed a few styles that I liked that are pictured above. This allowed me to begin structuring my article. I made some initial designs and mocked them up in photoshop to see how the first draft outcome would look. 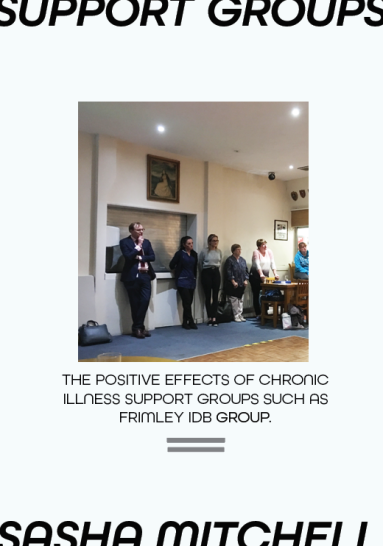 The pront cover of my article at the moment is extremely dry and has no correlation to the topic of the article. I need something that is not only eye-catching but allows the reader to understand the connection and metaphor that the design is having with the text. Matt Willey has an amazing collection of stimulating editorial designs. The layout and media tells us its own story. 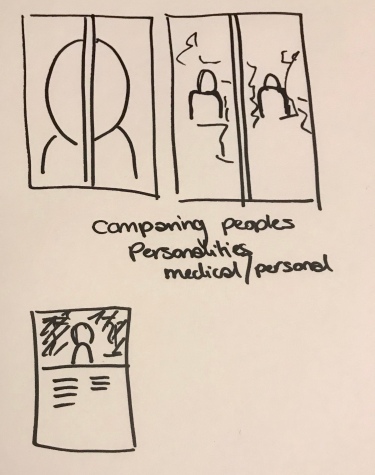 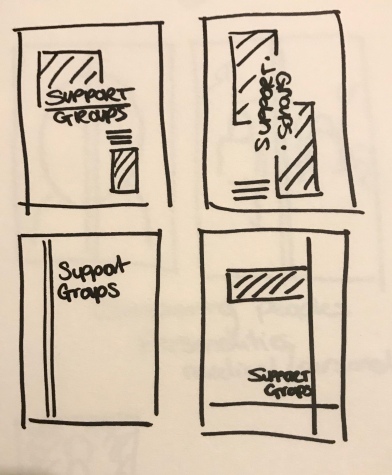 Keeping my idea of simlicity to be eye-catching and not be overwhelming. I started sketching up some ideas that used the words ‘support group’ in a way that actually depicts support and a sense of togetherness. Support groups are places where you start conversations and meet people because your lives have crossed paths. You are going on a similar journey to someone else and this is what you have in common.

I felt the best way of illustrating both of these things was with the use of lines. Arranging them alongside the text to suggest it is supporting the text in some way. 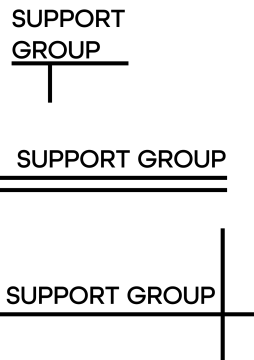 For the imagery, there is little I can do to improve as I cannot currently go out and take photos of people. However, looking into editorial photography, what most stood out to me that would work was interview style cinematic close-ups.

I want to use imagery with people in conversation, talking, smiling. That is including photographing people talking directly with me one on one, and people talking within a small or larger group but in an interview-style setup. The article has a narrative that not only talks directly at the reader but the topic is suggesting that it is good to talk to others. I want to focus on this through the photography used in the article. 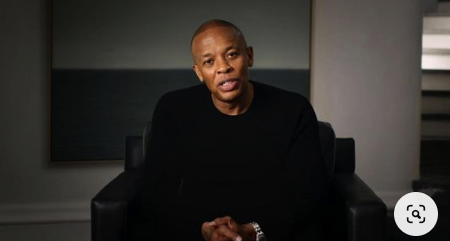 I have been looking at editorial shoots that I think would work well for my article,”Editorial Portrait shot for Hallmark Living Magazine”.There is also a social care project by Peter Byrne.

After a lot of searching though I found Lauren Maccabee, a portrait and documentary photographer. Her shots capture people in the moment during conversation for interviews and documentaries. Her photoshoot of DJ Paulette for the Intern Magazine really caught my eye. Although the topic is different, the energy from her shoots is magical. You get the expressions of so many emotions from her images. In one article, you see this normal happy woman, to a sill, fun, then suddenly serious. This range of character shown through images is exactly what I want to be shown through my article. 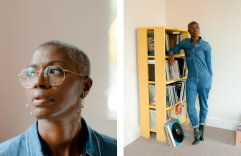 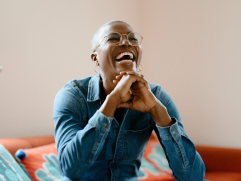 This new layout already has so much structure and its design has a much clearer narrative. I am close to getting to the final outcome for this with some final touches and possibly more jigging around of the front cover. Overall it shows that the text is about conversation, making connections and the separators help illustrate the “support”. 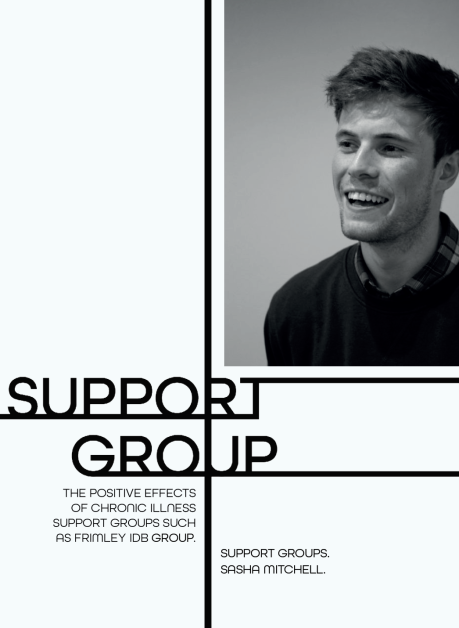 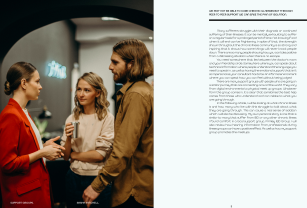 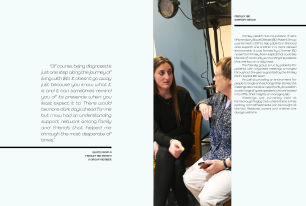 2. Your final design should include your full 3,000-word text and original, self generated images.

The design for my article is a minimalist brochure, with the photography being the focus for the design alongside my text. The layout of my text is clearly legible and has a flow that allows the eye to guide through the brochure with ease.

The photography for this project really was the structure for my article. It sets the tone of voice alongside the language I am using. I did struggle to find imagery that did this but the final imagery that I used for my outcome by photographer, Lauren Maccabee, had expression of emotion. Her editorial profile shots range from energetic, exciting, emotional, sympathising; while capturing stunning in the moment shots of real life. Although I would have loved to out and experiment with this style of photography, the current climate does not allow that. I am pleased though I have made a clear plan for what I would have like to have done if I had a chance. 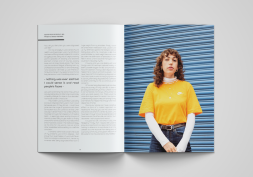 3. Write a short paragraph about the methods by which you might fund, promote and launch your project, if you were an independent author.

For this publication, due to the nature of its audience, is in need of reaching out to patients who would benefit from talking to someone or attending a support group. The placement for my designed brochure has been quite the focal point for the design thinking behind the article. It has to be seen by patients means it would have to be displayed in hospitals, doctors surgeries, and infusion units. This could also even be pushed to be in community halls where people are more likely to pick up, read, and share with relatives who may need this.

As this would be self-funded and for a voluntary community, the production of the brochure would need to be quite cheap. Using materials that are cheap, however, means the design has to stand out as much as possible from the crowd. Going forward this could be taken on as a series of articles about chronic illnesses, hospital life, and invisible illnesses such as the digital ‘The Mighty’. In which case the quality would need to be improved and this could possibly be funded by a Kickstarter campaign to get the ball rolling.

Overall, this project has been quite a struggle to write and design an article that is quite personal to me. For a topic that is difficult to share, trying to get it across in a positive, clear way. Designing a layout for an article that is both clear to read and is designed to follow the narrative of the text was new to me. I definitely believe I have learnt a lot. I do wish I had a lot more time to work on this, as well as having the opportunity to actually go out and take my own images which would allow me to explain myself better. However, I believe I have designed a clear art direction for this project to explain my ideas and what I would do if I could. I could never produce a perfect article in such a short space of time, but I believe I have made a successful plan for one. With what I had in this situation, I believe I have produced an outcome that works to the brief and I am very pleased with the outcome.